There is hardly anyone among people from different generations who haven’t heard of this name. John Gray’s bestseller Men Are from Mars, Women Are from Venus was published in 1992 and has become a book of significant cultural influence ever since.

To answer these questions and celebrate the upcoming anniversary of Men Are from Mars, Women Are from Venus, Headway Media interviewed Mr. John Gray to find out everything first-hand.

Part 1.
The journey before Mars and Venus

During our conversation with Mr. John Gray, we’ve been discussing how there is a lack of role models in many families nowadays, especially when it comes to men. So, of course, we couldn’t miss the opportunity to ask the Men Are from Mars, Women Are from Venus author to tell us more about his background, who he used to look up to as a kid, and what path has led him to become one of the most famous marriage counselors.

Mr. Gray grew up in a big family with five older brothers and a sister. He remembers that they had been a strong, Stanford-educated couple that never fought. However, their bringing-up tactics were in many ways the common ones for that time. It means that misbehavior was met with a popular belt punishment. Yet, it never applied to little John. Since he was the youngest, his parents decided to try out a different approach towards raising their son.

The religiousness of the family had an impact on Mr. Gray. So much actually that he became a monk later in life. A Hindu monk, to be more precise. And as unexpected as it may seem, there were two reasons for that: The Beatles and Woodstock.

‘When the Beatles came along, it was a great time. You know, I did all that. And after Woodstock, where everybody got very high, you also went way down. And I went down and thought, ‘This is not how I want to live my life.’ And the Beatles said that they had just come from India. They had a guru who said, you can get high, and you don’t come down. His name was Maharishi Mahesh Yogi of the Transcendental Meditation Movement. I became his personal assistant first. I was his younger teacher.’

Mr. Gray later became Maharishi Mahesh Yogi’s best student and a master of meditation. Such knowledge and experience let him live his life without any negative feelings. Impressive, but Mr. John Gray still spends at least two hours a day in deep meditation.

This unconditional love at the household and spiritual enlightenment will later lead Mr. Gray to write Men Are from Mars, Women Are from Venus — the international phenomenon that still claims its place on the charts of bestselling books. 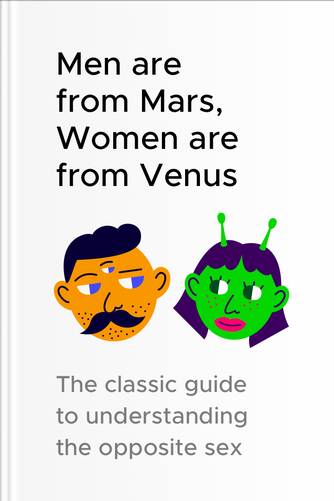 Men are from Mars

9 insights
Get key insights on Headway

The inspiration to write this bestseller came from Mr. Gray’s own marriage experience. He confesses that he faced the same challenges in relationships that other couples do despite all the knowledge. His marriage counselor expertise with an enormous spiritual background resulted in publishing Men Are from Mars, Women Are from Venus.

The main point was to turn this book into a breath of fresh air so that it doesn’t say women are wrong or men are wrong. Instead, it’s all about not understanding each other and often doing things that don’t work.

Perhaps that’s what made Men Are from Mars, Women Are from Venus a relationship handbook for several generations. For the first time in the world of psychology and self-help literature, readers understood the behavior and needs of both parties in a couple. Some people, though, perceive Mr. Gray’s bestseller as something that divides men and women in a big way and thus, impacts the equality between sexes. The author himself is fully aware of such ‘accusations’ and explains why they are not correct in his usual attitude — with confidence and a smile on his face.

However, nobody, including Mr. Gray, can deny that life has changed drastically since readers first acquainted Men Are from Mars, Women Are from Venus. And relationships, of course, have changed respectively. So what book is there to help us understand each other better now? Find out the answer in the next part of this interview!

In 2017 Mr. John Gray published his latest book, Beyond Mars and Venus. The topic is still the same, yet the focus is now on the relationships we see nowadays. All the innovations that keep on appearing change the roles of men and women in our society slowly but steadily. Ladies are no longer dependent on men, they aim to build high-achieving careers, and if relationships don’t work out, you can always quickly finish them and find something new. Yet the question arises — is this new dynamic beneficial to both partners in a couple?

Undoubtedly, there is no one correct answer to this riddle as there are dozens of opinions on gender roles nowadays. Many of them can be based on cultural and historical peculiarities. Nevertheless, Mr. John Gray believes that these new ways of interaction can be hurtful in many ways for those who are looking for romance in their lives. He supports it with the divorce statistics that have skyrocketed from 10 percent to 50 percent in America since the 1960s. And it’s not that surprising, as while women get more and more capable of handling everything on their own, the value of men in their eyes drops significantly.

So, one intriguing question remains. If the narrative has changed so much, what can Beyond Mars and Venus possibly unfold about communication in a couple in 2021? The answer turns out to be eye-opening and so apparent at the same time!

With this overwhelming and impressive power that women have claimed in different fields of life, one crucial duty appears — to be vocal about what they want and what they need. It may sound crystal clear, yet still, many girls struggle with being straightforward with their partners. The explanation comes from centuries of women being raised humble and silent, setting their desires as the lowest priority. Yet now, when so many doors have opened, there is no opportunity to stay in ‘the little mermaid mode.’

In the end, it seems like no matter what time we are all living in, the most crucial skill in relationships is communication. And to be more specific — the art of expressing your feelings, needs, and desires to your partner, and, of course, the ability not only to listen but to hear those words.

Part 4.
Finding The One in the lonely modernity

One of the most crucial and influential insights from Beyond Mars and Venus implies that women have the luxury of taking more time to find the right relationship with increased independence. Does it mean that we expect more and more women to stay single if they don’t meet a good match? The answer is yes…and no.

Mr. Gray highlights that since he wrote Men Are from Mars, the number of single people has doubled in America. It’s not necessarily a bad thing, as the acknowledged psychologist insists that it’s important not to even think about getting married until you’re about twenty-eight. The research shows that the brain doesn’t fully develop. The prefrontal cortex of the brain doesn’t form to the fullest until you’re twenty-eight. It doesn’t mean that you can’t be in serious relationships before then. Yet you can reach mental maturity, from a biological point of view, only once reaching this age.

The next point is that never in history have women had the freedom to be both masculine and feminine or career and relationship-oriented. And this fact, of course, leads to a higher bar for men and expectations from them.

From Mr. Gray’s perspective, if women knew what they needed and how to communicate what those needs are, they would have healthier relationships, and they would be able to fall in love. And while falling in love is an essential first step, staying in love is a much more complicated challenge. But how can we achieve it, and what influences this process? Find all the answers in part five!

Men are from Mars

9 insights
Get key insights on Headway

Love is a divine feeling, but it’s not the cure-all. Its presence in a couple does not guarantee the ultimate understanding and peaceful atmosphere all the time. Moreover, in previous generations, where women were much more dependent on men, it was all about making a man happy. As a result, the romance in those couples was dead pretty soon. And most of what was perceived as romance back in the day was simply a honeymoon phase.

Yet there is good news for the current young generation. Their chance to build strong and pleasant soulmate relationships are much higher. All thanks to women’s independence! How? Everything’s simple.

It is difficult and scary indeed to open to the other person and show your vulnerability. Yet, this process is vital for building relationships that would never lose romance and attraction. But the possibility of ending up with a broken heart is still present. When you are not independent enough, when you lack the sense of inner security, you don’t have a safety net to go deeper into the vulnerable feelings of being dependent. Only with confidence and power can you go deeper into your sensitive self. Because after all, if anything goes wrong, you are strong and wholesome enough to withstand this obstacle.

‘I see this transition as a very positive thing, but we just haven’t figured out how to get there.’

Yet Mr. Gray says things like cultural background and biology also dramatically affect us and the behavioral patterns we choose when we find ourselves in relationships. He is actually one of few authors who point out that the hormonal distinctions between men and women and how significant that is in terms of what makes us happy, how to create great sex, how to feel romance, and how to resolve arguments. These ideas served as a reason for many people in America to call the author of Men Are from Mars, Women Are from Venus sexist as they stand on the idea that men and women are not different at all. Meanwhile, in China, there is a whole university subject based on John Gray’s bestseller. To comment on this controversy, Mr. Gray stays positive yet confident in his views.

Moreover, Mr. John Gray is not surprised that many women, especially those under 35, make more money than men of the same age. In his words, that’s mainly because females tend to be more hard-working and focus easier on getting things done. Thus, these current tendencies are more than expected.

The Headway Media team expresses its gratitude to Mr. John Gray for his time and for making this interview happen.

Top 5 books for couples to make their love invincible

Meghan Markle, Prince Harry, and their fairest of all tales

The Best Formula to Boost Your Self-Growth