Robin Sharma is perhaps most known for his book, “The Monk Who Sold His Ferrari”. However, another offering of his, “The 5 AM Club: Own Your Morning. Elevate Your Life” is generating a lot of buzz at the moment. The book springs from a concept Sharma developed over 20 years ago. After putting it to work and watching it yield fruits for his numerous clients, the author decided to condense the ideas into a book that’d be easily accessible. The book catalogs some of the simplest yet unrecognized skills that could be tapped for greatness in life. Faithful adherence to the principle in the book promises to revamp the productivity and performance level of its adherents.

You’d think that as a previously published author, Sharma would hurriedly put together a book. That was not the case. The author spent four years fine-tuning his ideas, culminating in the book that has now become critically acclaimed the world over.

In this conversation, we examine Robin Sharma’s person and the process that led to the publication of his book. We will also take a dive into “The 5 AM Club: Own Your Morning. Elevate Your Life” unraveling the mystery that has made it a must-have for most history makers.

The “The 5 AM Club” attempts to hinge success on daily habits, specifically on the habit of sleeping and waking up earlier. The book’s idea is that once you begin your day correctly, everything else falls into place. No one embodies what a successful experiment of the book would look like than Robin Sharma.

Robin Sharma is a Canadian of Indian descent. He was born in Uganda but grew up in Canada, where he had his early education up to his graduate studies. He initially started out as a litigation lawyer. He decided to resign at the age of 25, and then self-published his first book, “The Monk Who Sold His Ferrari”. Folks often do not realize the umbrage it would have taken the young Sharma to make such a big move. He would first have had to believe in the book’s promise and further that other people would come to hold the same belief, even to the point of paying to read the book. He was right. Sales of the book and its popularity grew when the book was picked up by the publishing house Harper Collins. From that point, Sharma became a household name. He has since written no less than 14 books. Also, he is a leadership coach and expert, helping his clients live their best lives.

Sharma has enjoyed extraordinary success since his days of self-publishing. Apart from his books that have been widely read by millions of people worldwide, he has also taught his principles to movie stars, billionaires, and the likes. He is regarded as one of the best minds and thought leaders on the subject of leadership. He has spoken at several high-profile events, training the leadership teams of several organizations, including PWC, Oracle, Nike, and Microsoft. 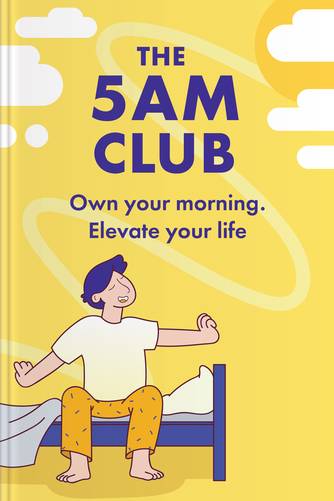 19 insights
Get key insights on Headway

There is no gainsaying the impact Robin Sharma has had on the world and popular culture. His audience of over 40 million individuals doggedly follows the pieces of advice in his books and messages. One constant idea that Dharma has espoused over the years is the possibility of a turnaround by revamping one’s waking habits. In The 5 AM Club,” the author elaborates on this idea, pointing out the specific steps and principles one can take to unravel the latent power locked into great habits.  Sharma posits that the “job of the leader is to help disbelievers embrace your vision, the powerless to overcome their weaknesses and the hopeless to develop faith.”

A Snapshot from the pages of “The 5 AM Club”

The “The 5 AM Club” is written as part fiction story and a part inspirational nonfiction book. Sharma weaves the principles into the lives of three individuals whose paths cross. There are several inspiring nuggets from the book. In this section, we will discuss just a few of them. You can read the entire book to get more insight, or you could head over to the Headway Library to read a succinct summary.

The power of habits

The “The 5 AM Club” is a reiteration of the assertion that a man is only a summary of his habits. Habits sometimes are what distinguish successful people from their “not-so-successful” counterparts. Healthy habits form the crux of an exciting voyage on earth, while unhealthy and harmful habits do the opposite.

Robin Sharma focuses on the habit of waking up early and beginning one’s day correctly. He does not make unfounded suggestions because there are actually reliable sources that show the benefits of waking up early. Besides, he touches on other helpful habits such as discipline, honesty, and self-control. When considered carefully, you’d recognize how each habit flows into the other. A well-rounded person really is someone who has framed every aspect of their lives with great habits.

The process of forming great habits is hard

“All change is hard at first, messy in the middle, and gorgeous at the end.”

No one is born with the ability to be conscientious or hardworking. If anything, the default setting of the average person is indolence. Hence, it takes a certain level of self-awareness and mastery to suppress your default setting and do the needful when the need arises.

19 insights
Get key insights on Headway

Sharma teaches that habits can be quite hard to form. For a new (good) habit to stick, you need, on average, 66 days. Also, there are three stages in the process: destruction, installation, and integration.

“All shadows of insecurity dissolve in the warm glow of persistence.”

“The 5 AM Club” is a must-have for those looking to become successful in whatever field they find themselves in. Worth mentioning is the 20/20/20 principle Sharma teaches in the book. Robin Sharma has condensed whole years’ worth of ideas into a digestible form. There is no overstating the importance of reading the book. If you are unable to lay your hand on the book for any reason, the summary on the Headway app comes in very useful.

The Monk Who Sold His Ferrari: mindful living in 5 exciting steps

The Productivity Cycle: how stress can lead to improved performance