When the news about Meghan Markles’ engagement to Prince Harry broke, many people were excited. The beloved actress with a quite humble background was about to join the British royal family. Yet, to everyone’s surprise, this love story was destined to face major obstacles on its way to peace and harmony.

A year before the broadcast of the couple’s scandalous interview with Oprah, the book Finding Freedom was published. Royal rules indeed are more than strict, and authorizing a biography is not allowed by any terms. However, Omid Scobie and Carolyn Durand tracked Meghan and Harry’s story from the very beginning and turned it into an unconditional bestseller. Among all the books on the British royal family, this title can probably only be beaten by Princess Diana’s sensational biography Diana: Her True Story — in Her Own Words.

In this article, we tried to recall the most intriguing and groundbreaking facts about the Duke and Duchess of Sussex relationships. You can dive deeper into all of them in the summary of Finding Freedom on the Headway app.

Ready to spill the royal tea? Grab your cup! 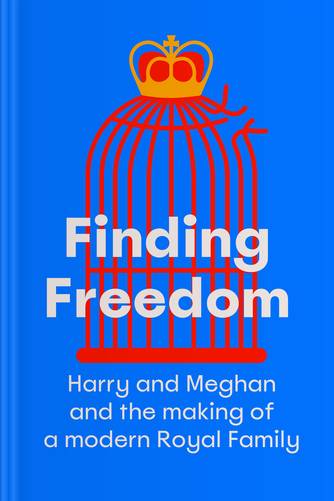 by Omid Scobie and Carolyn Durand

Soulmates who meant to be

They may seem like people from different realities, yet it turned out that the American actress and the Prince of Great Britain have many things in common. Both of them appreciate a simple and humble lifestyle, with family as the main value. To add up, from Finding Freedom, you can learn that both of them share an interest in humanitarian service. In 2015 Mehan was a speaker in Toronto’s 2015 “Dove Self-Esteem Project” and the Women in Cable Telecommunications Signature Luncheon in Chicago that same year.

One of Harry’s most outstanding philanthropic accomplishments was holding an international sporting event for wounded, ill, and injured members of the armed services and veterans called The Invictus Games. Considering his military background, there is no wonder where the idea of the event of such importance came from. And just like that, sharing more than enough in common, two unimaginable worlds became one.

Two against the world

Many people crave that place under the sun, or to say better, camera fresh. Little do they know what price one has to pay for all the attention from paparazzi.

Despite the admiration for the couple from millions of people, some seemed unhappy with the union. It led to unbearable pressure on Meghan. Tabloids filled with lies, gossips, judgment — even the celebrity life turned out to be not enough to prepare the future Duchess of Sussex for it. Many of those cases are described in Finding Freedom, including Harry filing a legal case against Mail on Sunday to protect Meghan. What society didn’t know until not so long ago is how Meghan felt while being a part of a royal family. In her interview with Oprah, she confessed to having serious mental issues due to all the drama that was going on. On top of that, the royal protocol just made things even more intense.

From that, the free spirit that lives in both Harry and Meghan led them to the decision nobody saw coming — stepping back as senior royals for the sake of their family and happiness.

by Omid Scobie and Carolyn Durand

It all seemed like everything ended. Finding Freedom wrapped up the couple’s story at the moment where they moved to Los Angeles in 2020 and lived happily ever after. Or did they?

On March 7, Meghan, alongside her husband, sat down with Oprah to answer the questions that have been in the air for the past four years. From ‘the feud’ with her sister-in-law to revealing expecting the second baby, Markle shed light on many topics. Supporting his wife, Harry also shared his experience and worries about communicating with his family and having not-so-pleasant conversations about his son back in the days of living at the palace.

As was expected, social media were filled with opinions about the couple’s confession. It seems like two camps have been formed where one is all about supporting Sussex Royal, while the other doubting where their words are actually true.

No matter how the story will unfold in the future, the most important thing is that Meghan Markle confirms that right now, their life is “greater than any fairy tale you’ve ever read.” Yet if you want to be on the same page with the rest of the British royal family fans worldwide, it is a good idea to read the whole summary of Finding Freedom on the Headway app. Guess it’s time for the 5 o’clock read!

Memoirs of a lovable first family

Top 5 books for couples to make their love invincible

Yes, you can! Top 5 books to read before the International Women’s Day