People often find their mothers as the best person with which to be vulnerable. A mother’s cuddle, kisses, tears, bedtime stories, and other shows of affection stay long in the memory of a child, even well into adulthood. There are a plethora of factors involved in the science of a child’s personality formation. However, in several studies, the mother’s personality is a major determinant of the temperament exhibited by many adults.

The boy-child is not absolved from the implications of toxicity of parents, particularly mothers. However, a mother has the most impact on the girl-child. The huge bulk of personality traits that adult women exhibit is often a product of, or in defiance to, their mother’s personality attributes.

Implications of having a narcissistic mother

“Emotional legacies are like genetic legacies; they pass along to each generation without anyone really taking a lot of notice.”

For clarity, a narcissist is a person that is arrogantly self-absorbed and cares less about the feelings of others. For most mothers, it is just another way of getting results. However, narcissism has manifold effects and leaves hard-to-excise attributes on their daughters. Impressions leave indelible strains of pressure on daughters of narcissistic women.

Here are some ways in which narcissistic mothers damage the life and self-esteem of their children:

Burning out from trying so hard

There is always that daughter who becomes a self-acclaimed super-achiever, all in the name of pleasing mum. Ladies in this category see their value and worth as emanating from the product of exacting themselves. Are you wondering if you fall within this category? Assess what defines your identity. Do you lack self-care as a result of an unhealthy pursuit of over-achievement? You may be mummy’s lab rat, working the wheel.

Some daughters are too cerebral to fall for their mother’s tantrums and the accompanying emotional exploitation. Rather than embark on the endless race of acting the good girl and pleasing mum, they take a different path — self-sabotage. More often than not, the goal is to drive home the “it’s my life” point. However, many daughters live a destructive, under-actualized, and subpar life, all at variance with their mother. Some daughters try, at the onset, to be “good girls.” However, after noticing the mother’s voracious appetite for self-pleasing, many daughters tend to veer off course.

“Narcissists commonly cut people off and out of their lives due to their shallow emotional style of seeing others as either good or bad.”

Seeking self-definition from other relationships

Daughters of narcissistic mothers are wont to look for validation and love from external sources. Unfortunately, there are almost always available men waiting to exploit emotionally vulnerable women. This category of women is mostly rash about their relationship choices. In haste to fill the chasm left by unhealthy parenting, daughters may seek to eliminate such voids using any fodder at their disposal.

When things eventually spell out, women with narcissistic upbringing tend to feel the ubiquitous sting of inadequacy. They often try too hard to make their other relationships work, sometimes encouraging exploitation in their partners. Hence, the narcissistic cycle tends to continue, in what psychotherapists refer to as “repetition compulsion.” When such a relationship ends, the woman is usually at the receiving end, as she would most likely see the failure as her fault, even when the man has obvious shortcomings. 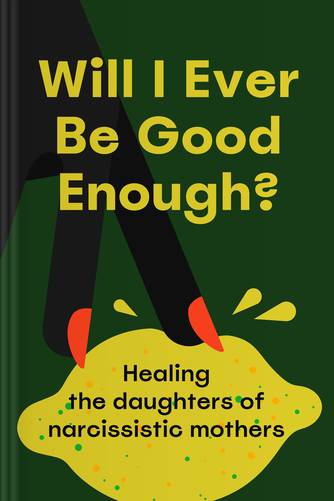 Will I Ever Be Good Enough

There is a high tendency of spurning everything that reminds a daughter of her narcissist mother — even the good aspects. However, the fear of a sting should not keep one from collecting honey. It all boils down to the methods we employ in achieving our goals. For example, if a mother is a lover of scholarship, education, modesty, cleanliness but is toxic in other parenting areas, that would be an unwise excuse for disliking her highpoints.

Any trace of a narcissist mother’s trait at the beginning of the daughter’s parenting life can result in a little panic. However, honing the good portion of your mother’s personality and throwing the toxic aspect overboard should be the best bet for your children. You can be a better mother by a full berth.

Identifying traits of a narcissistic mother

It may come as a surprise that many women do not realize their mothers were narcissistic until adulthood. Here are some ways to identify or self-assess narcissistic tendencies:

An uncanny sense of self-importance

Narcissist mothers make it a point to rub every flimsy life achievement in the face of their wards. Questions like: “why can’t you take after your mother?” are common pick-up points for such mothers. In other extremes, narcissist mothers may even blow their achievements out of proportion, making the child stretch herself to some unrealistic limit, all in a bid to please the mother.

An exaggerated belief of their uniqueness

Narcissistic mothers always see themselves as too good for their clime. Statements like “I made a mistake marrying your father, he didn’t deserve me” are common to such women. There’s an aura of entitlement constantly streaming from their person, and daughters are often on the receiving end of such toxic personalities.

This kind of mother is the type that makes a scene at events if the host mistakenly fails to acknowledge her presence. As a matter of reality, daughters of narcissistic mothers prefer not to appear in public with their mum. On the few occasions where they cannot revoke, they choose not to introduce their mothers at events.

Lacks empathy and is interpersonally exploitative

Narcissistic mothers have the habit of calling out their daughters, especially in public or before guests. They seem to be devoid of the skill of correcting others in love. Another telltale sign of their narcissism is the habit of exploiting others, courting their fealty just while some benefit is in the offing.

Will I Ever Be Good Enough

Plying the path to self-recovery

The cycle of narcissism can be brought to an end as soon as the victims identify its presence. For starters, there’s a necessity for accepting the circumstance in which you’re wound up. Psychologically detach yourself from the negative imprints, and accept your own identity. Recognize your narcissistic tendencies, if you’ve acquired any, and forthrightly eliminate them.

Mothers are a key determinant of how well their daughters turn out in later life, particularly in determining their personalities. Now, the path to recovery burgeons. There will be the need to acknowledge and relive some pains of your youthful days. Healing, however, necessitates allowing those pains from yesteryears to find expression. Free yourself from the shackles of unrealistic expectations. Set your own goals, standards, values, passions, and pursue them wholeheartedly. In no time, the emotional stability to mother and raise healthy and fulfilling children will be within reach.

“It is not easy to find happiness in ourselves, and it is not possible to find it elsewhere.”

Luster from Rough Gems: Making the Best of the Thanksgiving Holidays

The Day of the Dead: 5 books to remind you why family matters