As we know it, the earth has been on a downward spiral since the beginning of the industrial age. Majorly, burning fossil fuels alone has considerably increased greenhouse gas emissions into the earth’s atmosphere. One of the several pieces of evidence of the global temperature rise is the melting of ice caps in the polar regions. A recent study by University of California Berkeley researchers shows that the earth’s average temperature is at a record high.

Global warming, according to NASA, is the extended impact of human activities and how it has affected the climatic system of the earth. Comparatively, climatic vitals from as far back as the mid-nineteenth century are juxtaposed with more recent figures. Such analysis gives a vivid picture of the earth’s climatic trajectory and the potential turn of events.

Causes of climate change, and how it’s been manifesting globally

“Climate change is a terrible problem, and it absolutely needs to be solved. It deserves to be a huge priority.”

Right after the industrial boom of the nineteenth century, several industrial innovations were flooding into the mainstream. With the rise in the mechanization of several industries came an imperative to keep them constantly fueled. The machines of the time functioned on power from sources like steam, fossil fuel combustion. However, fossil fuel began to gain widespread acclaim across the world, mainly due to the discovery of large deposits that can be exploited for several decades. Consequently, with the discovery of crude deposits, exploration, refining, and utilization processes have increased industries’ carbon footprint. The earth has a natural way of refining the carbon dioxide released into the atmosphere. However, the fast rate of carbon emission has led to a retention of about 80 percent of the atmosphere’s carbon dioxide. This retainment has gradually been heating the earth over the years. 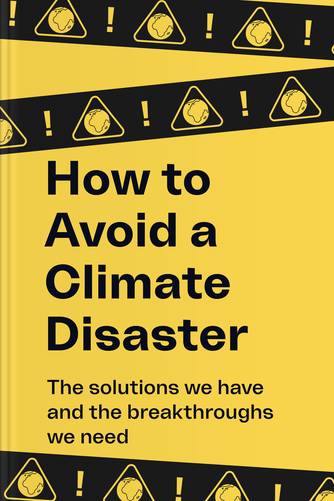 How to Avoid a Climate Disaster

8 insights
Get key insights on Headway

Bill Gates has many researchers and scientists under his patronage, thus causing him to have a ton of firsthand information of climate change’s present and potential future realities. His work has led to the discovery of earth’s fearful fate in the next ten years if we do not apply the brakes in polluting the environment. Therefore, Gates sensitizes all and sundry in How to Avoid a Climate Disaster: The Solutions We Have and the Breakthroughs We Need.

The realities of the earth’s rapidly changing climate stare us in the face, now, more than ever. Some implications of the climatic spikes of thEarth are, but not limited to the following:

Carbon dioxide (CO2) surge: The first consistent calibration and record of the earth’s atmospheric CO2 were initiated by scientists in 1958. At that time, an average CO2 level of 316 parts per million (ppm) was recorded by researchers. Before the industrial revolution of circa the 1950s, the CO2 level lingered around 280 ppm. However, in 2017, the figure peaked at an all-time high of 406.58 ppm, the highest in 60 years. Forest vegetations and the water bodies help to recycle portions of the atmospheric CO2 deposit. However, forests are experiencing depletion at unprecedented speeds. Equally, the processes involved in utilizing forest trees are adding to the already high carbon footprint. The earth keeps itself warm enough for human habitation via the greenhouse effect. But human activities are on a course of leading global average temperatures by the “cliff’s edge.”

“Twenty-five years ago, people could be excused for not knowing much, or doing much, about climate change. Today, we have no excuse.”

Heatwaves and wildfires: Climate change manifests like a ripple effect—the increased fraction of the CO2 in the atmosphere results in a rise in average global temperature. Thus, we have hotter summers, more fierce rainstorms, and unpredictable blizzards. In 2020 alone, twenty wildfires erupted in various parts of California, with five being the worst ever recorded. Such occurrences are starting to have a direct impact on our daily health. Californians, for example, acknowledge the change in the night sky color, poor daylight visibility, and polluted air. Though the consequence of wildfires seems to be local, the numbers and global implication keeps adding up.

“I cannot say whether things will get better if we change; what I can say is they must change if they are to get better.”

Shrinking of Arctic ice sheets: The rise in sea levels directly links to the Antarctic regions’ melting ice sheets. The intervals between 2015 and 2019 have records that show it to be the warmest in the recent century. During this period, the earth’s increased warmth led to higher sea levels by 3.6mm. Scientists are attributing the rise in seawater levels to the disappearance of ice sheets around various earth regions. Satellite imagery reveals the sudden disappearance of a sizable chunk of the Greenland ice sheets.

Changes in the planetary ecosystem: The erratic weather and declining climate have led to a lot of disruption in the earth’s biota. Planting seasons have taken major shifts, forcing plants to adapt fast, and in some regions, the shock results in harsh drought. Animals of the wild are migrating in unprecedented numbers. A good example is the white polar bears moving to the arctic hinterlands as ice sheets melt or make their dens on land.

“While the problem can sometimes seem overwhelming, we can turn things around – but we must move beyond climate talk to climate action.”

How to Avoid a Climate Disaster

8 insights
Get key insights on Headway

Some theorists believe that pandemics, droughts, hurricanes, and weather-related natural disasters may well be the planet’s way of healing itself of the ‘human flu.’ Though that submission may sound fictional, however, our climatic future rests on the decisions we take now and how fast we collectively act on them.

We all must acknowledge the severity of our present situation. There are already initiatives by the United Nations to motivate nations to keep their carbon emission down. Sanctions are being handed out to countries like China, which rank as the highest polluter of the earth’s atmosphere. There’s also the earth hour movement, which creates global awareness and encourages individual participation in mitigating the effects of climate change.

The climate change battle is as much a political one as it is scientific. Beyond the UN plenaries, local movements, NGOs, and activists are beginning to hold their government accountable. For example, many Alaskans stood up to President Donald Trump’s decision to open up arctic refuges for oil drilling. Influential figures like Bill Gates took the approach of laying out actionable steps in his book – How to Avoid a Climate Disaster. Gates’s significant suggestion being the utilization of electrical energy in substantial industries. Also, he emphasizes investing in scaling and efficiency improvement of electric, solar, and wind farms.

Several titles on the Headway library discuss the implications of climate change. Read to educate yourself, then take action towards emancipating unborn generations from the oncoming doom.

Decluttering: what to do with all the mess after the festivities

Save Mother Earth, it’s the only planet with Black Friday

What they did: lessons from some of the world’s greatest companies