Avoid them too, and become happier and more successful in life.

Do you sometimes feel unhappy, overwhelmed, or worried about challenges in life? That’s okay; it is human nature. But what is not okay is feeling this way all of the time. Life changes in the blink of an eye, and the world has so much more to offer than being anxious. Sadly, many people are stuck in this rut; while some try hard to free themselves, others do not even know why they feel this way. It’s simple; you’re deficient in a life skill that gives you the power to become happier and more successful in life. It’s called Mental Strength.

“The strength of your mind determines the quality of your life”

The good news is that you can easily improve your mental strength by NOT DOING some widespread habits people usually engage in. These insights come from Amy Morin’s 13 Things Mentally Strong People Don’t Do, a great eye-opener that shows readers where they’re lacking and what needs to be done to improve mental strength. Amy Morin (LCSW) is one of the best psychology specialists in her field and has written many psychology-related books. Most of them have been translated into as many as 35 languages. She also contributes to Forbes and many top psychology websites while also lecturing at Northeastern University, Boston. 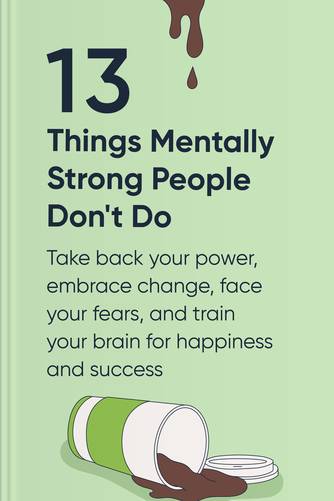 Everyone has varying levels of mental strength, just like we all have different amounts of physical strength. This is why some experiences that may be so devastating to one might not be so bad for the other. In the book, Amy shares a very trying period of her life, when she lost her mother suddenly after a brief illness. While she was still recovering from the grief, she lost her first husband too. According to Amy, it was emotionally, mentally, and physically exhausting. Four years later, she suffered another loss; her new husband’s father.

After all that had happened, it might have been all too much to handle for someone else. However, Amy made a decision that enriched her life for the better. She decided to focus on what not to do to ensure she came out on the other side of her grief. To become mentally bulletproof, you need to employ these same techniques that Amy used. Find out what you need to do below.

The following techniques are only a few (the most common ones) of all the methods Amy teaches. They help you deal with grief and will better equip you to face life’s challenges. They allow you to take back power from your fears while you also smash all your goals.

1. Feeling sorry for themselves

When a person is going through a challenge or experiencing grief, they often feel like they’re the only ones who face such bad things. But in reality, everybody goes through challenges, and only by accepting these challenges do we become more assertive.

Amy tells the story of Jack, a schoolboy who got involved in an accident. Even though the doctors promised a full recovery, his mother kept reminding him about his accident and how his leg may never fully heal. Of course, this greatly affected Jack’s mood so much that he had to see a therapist. His therapist taught him to see the good in the terrible event that had happened to him instead of remaining perpetually sorrowful. He channeled his grief into writing about how he beat his challenge and eventually wrote a book called How to Beat a School Bus. Just like Jack, to become mentally strong, you must never waste your time in self-pity.

2. Shying away from change

Although change is constant, it doesn’t stop being difficult. We all fear change, and that is because it takes us out of the comfort of what we know. As a mentally strong person, you need to know how to confront, embrace, and adjust to change the right way. If you try to change too much too suddenly, you are setting yourself up to fail!

For example, Richard went to see Amy as his therapist because he felt he wasn’t making progress with his physical health. He had recently been diagnosed with diabetes and looked to make diet changes for a healthier lifestyle. He also had plans to hit the gym to lose weight. But you see, he wasn’t handling change the right way, which led to him avoiding it altogether. He not only avoided the gym; he was even eating more junk than before.  He was changing too much, too fast. Amy encouraged him to choose one thing to change at a time, which helped him handle his new lifestyle more effectively.

A mentally strong person must pace themselves when dealing with change not to get too overwhelmed and eventually abandon the change.

3. Worrying about pleasing everybody

Megan came to see Amy in her office because she felt overwhelmed and stressed out. She was a young married woman with two young children. Besides her part-time job, Amy also worked as the Girl Scout troop leader and taught Sunday school. She even babysat for her sister and did many other activities that took up her time. It was evident that Megan didn’t know how to say no. She was a people-pleaser. She said her biggest fear was that people would think she was selfish. Her lifestyle not only became overwhelming; it began to affect her marriage and family life significantly. Thankfully, Amy helped her discover that her need to always feel liked was even more selfish than saying ‘no’ to someone. She was vain to herself and her personal needs.

You cannot please everyone, so don’t try to. To improve your mental strength, you need to learn to say ‘no’ sometimes. If you don’t, it will be so mentally and physically depleted that you may become overwhelmed and extremely unproductive.

Many people are guilty of being afraid to take risks in diverse areas of their lives, and inadequate knowledge of handling these calculated risks can increase this fear. Dale had been a teacher all his life, but he had a dream to own his furniture store. When he told his wife about his plans, she simply rolled her eyes and called him a dreamer. But the more Dale thought about it, the more he wanted to go for it, even though he couldn’t bring himself to make the decision. After a therapy session with Amy, he decided to go for it and open a store on a part-time basis. If it yielded great returns, he would go all out and maybe even quit being a teacher.

Taking calculated risks comes with the package of being mentally strong. You can’t do anything without it. To take accurately calculated risks, you need to practice risk-taking frequently. This way, your skills will significantly improve.

5. Dwelling on the past

You don’t get healed from the past by dwelling on it — the present is waiting for you to live in it. The things we have done in the past cannot be undone, yet we trap ourselves in guilt and shame. There’s no sense in that. Learn to leave the past in the past.

Gloria was fifty-five years old, but she had an unemployed daughter who wasn’t doing so well for herself. Since her daughter turned eighteen, she moved out of the house and moved back in too many times. She changed boyfriends at the snap of a finger and had other unhealthy habits that worried Gloria. But she allowed her child to do what she wanted because Gloria felt it was the least to make up for not being a good mother in the past. She was trapped in the guilt that her former lifestyle made her daughter the way she was then. Through therapy, Gloria discovered that she was self-condemning. That made her treat her daughter the way she did, accepting all her excesses. That her behavior wasn’t even helping her daughter but enabling her.

This is what living in the past does. It doesn’t allow for progress. To become mentally strong, you need to let go of the past; if you don’t, you are self-destructing.

“Mental strength is what separates champions from near champions”

The same way you frequently work out to stay physically fit, incorporating these strategies into your life and their frequent practice will keep you mentally fit. You may not see immediate changes, but you keep getting better at it if you keep at it. It is a personal journey, and you need to learn to coach yourself if you want to succeed in life. Summarily, to grow mentally strong, remember to take these three steps daily: Keep track of your new avoided habits and behave positively, Keep managing your emotions so they don’t control you, and Keep thinking about your thoughts, identify irrational ones and replace them immediately with realistic ones.

For further reading on mental strength, check out the summary of this bestseller on the Headway app to find out all the key ideas in just 15 minutes.

Start your journey to no addictions